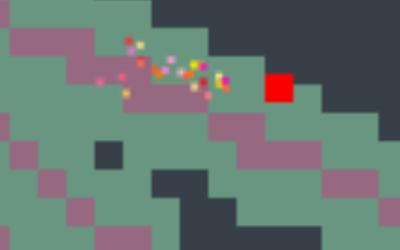 A game that let you live the full exciting life and carreer of an electron.

Use "Up" and "Down" arrow keys to control the electron up and down.

Ahmed Khalifa: Great job on finishing a game with a lot of levels in that short amount of time. The game have this interesting racing and twitch reflexes that reminds me Sophie Houlden game Swift*Stitch. My problem is the color scheme is not known from the beginning which made me lose health whenever the color scheme changes between missions. Also, the difficulty ramps very fast after level 6 in mission 1. I think you should smooth the difficulty so it doesn't ramps that quickly especially that the previous 6 level are slowly increasing in difficulty that it starts to get boring quickly. I would also recommend to use paths similar to orbits since you are an electron just to connect the game name to what is happening inside the game and your story. I would also consider introducing new mechanics between different missions for example using X to pass through certain walls that appear in the middle of the track, or having a shadow brother and pressing X swap your location with the shadow brother. You could also consider a mode where you push other electrons outside of the paths. Overall good job :) there is a lot to consider in the game since your are primary focus is on the experience of being fast reaction but the most important thing is to make everything clear for that response to happen either by saying which colors you should always follow nad which to avoid or doing like Mario Party where both paths can be followed but one is harder with more rewards later and the other is longer but more boring.

Michelle Mannering: Love the opening! Sound effects and animations are great. Text is a little large, over the top, and a bit hard to read. Sounds really spooky though Wasn't entirely clear from the start what the colours mean, however playing the game you quickly figure it out. Fun and addictive! Very blurry though. Making the game more crisp would be easier on the player's eyes and I could then play for longer.