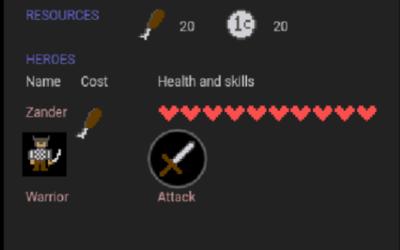 Eftiell: Back to the Crypt

You saved the village of Eftiell. You defeated the evil Lich and his minions in that ghastly crypt. But now, a new danger has arisen: the Doom Knight is awake in the very same crypt. You must go back... Back to.the crypt!

Anonymous: First of all, congratulations that you were able to have a mini RPG with a very small footprint. - The game is interesting, I loved the way the map is just a graph like DiceyDungeons and FTL which simplifies all the problems but at the same time, it needed more work to reflect what is in the area. - There was a group of bugs that need to be fixed for example, if there is a bandit and I left him away I can still continue and ignore him and he is not there anymore. If there was a shop it also disappear. I can understand that behavior is interesting for the shop as its an opportunity for the player if he didn't do it now, he won't be able to do it ever which produce that interesting choice of should I buy or not. In the case of the bandit, it doesn't work as the best choice is not to give him money. Also, in the current build there was nothing to get more coins so giving 30 coins to banit won't happen ever. - The fighting maybe need some text telling you that you can press on the attack button as the first time, I thought it was automatic fighting. I think you can improve also the fighting by having some misses and critical strikes so it feels more dynamic instead of always killing it in same amount of time and losing the same amount of health. - The game lend itself to a nice PCG system which I suggest to go for it, you can govern that system by using graph grammars (Check the work by Joris Dormans on Unexplored, Tom Coxon on Lenna's Inception, Ahmed Khalifa on Obstacle Tower) - Maybe add a little bit from traditional RPGs so the player have more choices to pick from other than where should I go next? maybe something to consume more food but gain health back or maybe resting buy risk chance of getting robbed at night etc. I encourage you to try to work more on that game, I think there is a nice potential behind it. Also, I think you should look for adding controlled PCG system using graph grammars. Overall, I enjoyed my time playing the game and seeing the full potential behind it. Feel free to contact me if you decide to continue working on it and want to work on some PCG systems.

Pedro Fortuna: I think the game needs further development. The screen could be better used. Some graphics while doing fights etc.