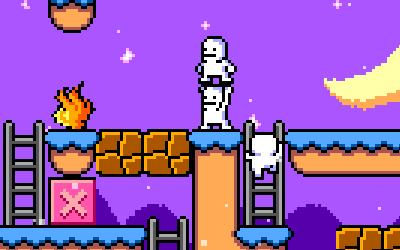 "You are having the same dream again... the dream where everyone must die..."

Dying Dreams is a puzzle game where you have to kill all the... uh, "figures" on the screen. The difficulty is that you control all of them at the same time!

The game contains 13 puzzles, most of them not too hard (except maybe the puzzles in the end).

Controls:
- Arrow Keys: Move
- Backspace or Z: Undo
- R: Restart (on non-QWERTY keyboards the key below 4 and 5, I think)
- Enter: Pause (you can restart and undo from here, too)

Notes on audio: audio should work on both Firefox and Chromium-based browsers, but since Firefox does not support one function, audio sounds better in Chromium.