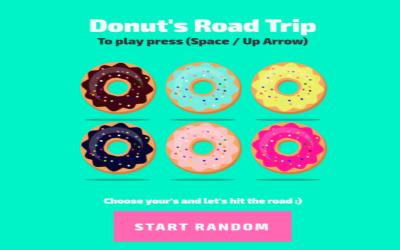 You favorite donut is somehow slipped on the road but now it's rolling. You need to save it from the wild traffic :P. Keep jumping !!!

Jupiter Hadley: Lovely donut graphics! It's a simple game, but it is easy to play and works well.

Larry Chupacabra: Simple endless runner style game. Where you play as a giant donut trying not to smash into cars. Its all pretty straight forward with only one challenge level and one button to avoid some car hitboxes. Not sure how it fits into the jam theme of Offline other than the text Offline appearing on some of the vehicles that spawn ahead of you. Maybe because nothing is connected to the power grid? This part I think might need to be defined better.

Dann Sullivan: While I enjoyed the donut design, I can't help but feel you added in the theme on the cars as an afterthought. Nice effort on the donut designs and changing of the vehicle covers considering the file limitation.