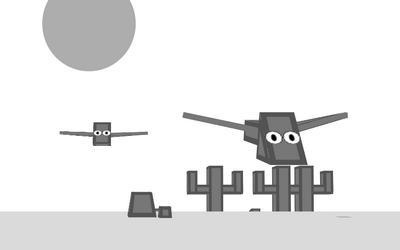 This is a 3D remake of the famous Chrome Dino Game. Run as far as possible or race with one of your friends, but be careful not to bumb into any obsticles!

The game is best played in Chrome, but is also playable on Firefox (with shorter render distance and lesser special effects). Please note the game may run slower on older PCs.

Jupiter Hadley: There is a lot going on in this entry! I love the 3D graphics, the inspiration from Chrome, multiplayer is super cool, and there is even a shop! The game just needs a little polish and boom - perfect releasable thing. Well done!

Spartez Team: I like the idea of remixing classic offline game. It's impressive how much you were able to implement. I like the graphics and the effects but the game is running very slow on my computer making it nearly unplayable. The code itself - all of the code is in index.html file wich is not the best idea. The code style is way off - it looks like a C not JS and CSS you should look into that. Work on modularisation, naming things and having clean easily readable code (remove commented code etc

Mike Cook: This is a fun idea! I enjoyed the 2D version a lot, and switching it into 3D has lots of nice, interesting ideas. It ran a bit slowly on my Macbook, but that's okay! I like how the birds/nearer objectives add an extra layer of difficulty by obscuring what's behind them and approaching you? The day/night cycle is a cute addition as well - very effective and minimalist.

Dann Sullivan: Very clever use of the theme. Hitbox on cactii needed some work, but achieved everything you set out for.