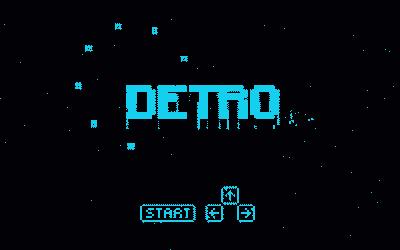 In Detro you fly your jetpack powered alien while shooting creatures in space. Careful where you shoot, your bullets come back towards you and can kill you. Powerups offer shield protection from enemies, shooting many enemies quickly increases your combo score. A 10X combo spawns another powerup, a 15X combo spawns an extra life. Collect the green points from killing enemies to unlock the mega weapon which destroys all enemies. Survive long enough and you may encounter the Boss.

Anonymous: Good: - Nice pixel style graphics. Love the color schemes, simple pixel arts, and the explosion effects. - The game theme fits with the competition theme! - Nice gravity effect which will bend the bullet path when it flies back to the player. I like this game mechanic. It takes time to get used to it but it’s quite powerful. - Nice sound FX! - The power-ups! What could be improved: - Sometimes it’s hard to differentiate between the enemy's bullets, bonus items, or the star background. - The game could be so hard since the enemies could suddenly appear randomly in the middle of the screen while you’re flying around. Maybe could make an indicator before the enemy spawns, or make them always appears from above or right part of the screen.
back