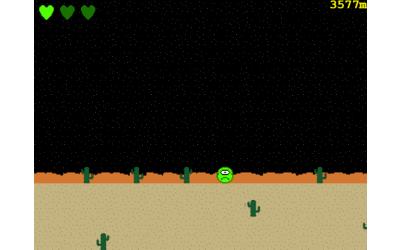 "Anime fans across the world have succesfully raided Area 51, but poor Dengar here quite enjoyed his containment facility"

'Endess' runner that's not quite endless...and it's in reverse. You play as Dengar, an alien trying to get BACK into Area 51.

Controls:
On mobile, a virtual gamepad is provided to allow for touch input. On PC, you can either mouse-click the virtual gamepad, or use the keyboard

Anonymous: First of all, congratulations on finishing and submitting your game to the JS13K competition. The game has a very smooth movement and very responsive to the keyboard. The main problem is that the cactus generation is very close to each other and sometimes make it impossible to pass with the current player speed. It can be solved by adding a dash ability so you can't pass longer group of cactus or change the distance between cactuses. Also, the left and right movement can be removed if the speed of the movement is higher like the dinosaur runner that happens in chrome. If you want to keep the left and right so the game is different from the dino running game then you need to emphasize or make them more useful, maybe collectibles or powerup that you need to aim towards. Overall, great job on creating the game but try to make it more unique than dino running game.

Pedro Fortuna: Nice that you implemented a virtual gamepad for mobile. A bit monotonous, though. At least the first minutes.

Jupiter Hadley: Funny concept! I found the jump to be a bit much, but it's a great start!