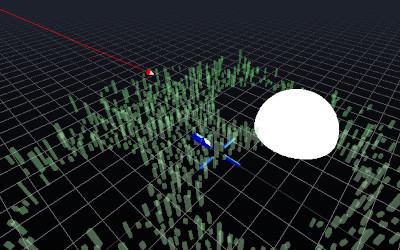 Your city is bombarded from orbit.

You control an defence platform, your task is to ensure survival of at least 25% of population for as long as possible.

How to play
This game requires a VR headset and two hand controllers.

Steven Yau: I liked the concept with this and loved the arcade original, Missile Command and the aesthetics looked on point for this style of game, It took me a while to understand that the missiles would explode where my hands were rather than where I was aiming so rather than being behind the missile turret firing on the incoming targets, I had to be between the turret and the targets to hit them which felt odd. I would love to be in the position where I could see the city, turrets and targets at once as that would be a great view seeing all the explosions and action, but understand the difficultly in a control system that control where the missile would explode. Two ideas come to mind, having two buttons to fire missiles for short range and long range explosions or perhaps use the distance from the headset to the hand controllers to control that range. eg firing missiles with your hands to next to your face would be a short range, arms outstretched would be a long range explosion. Hope to see a v2 of this as it has a lot of potential as an arcade experience.

Jupiter Hadley: Sadly, I do not have a VR, but this is a very impressive entry by the sounds of things!

Fernando Serrano Garcia: Really interesting concept, I really like the controls and the point of view. It took me a while to understand what was going on with the shoot controls, but once you get it it makes sense and start the fun. Nice point to add details on how much affected the city was.

Sébastien Vandenberghe: Nicely done !!! I love how the view feels like you dominate the work without causing any motion sickness. This is also pretty and engaging. Well done !!!