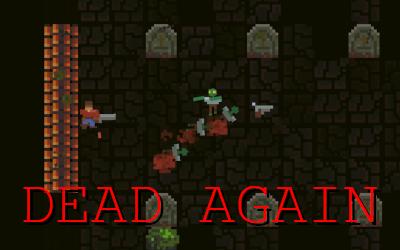 Death was not enough to keep these evil spirits down.

Defend yourself against the onslaught of zombies, vampires, ghosts ... and more.

The longer you play, the stronger they get.

Survive for as long as you can, but it is only a matter of time before you are ... DEAD AGAIN

- WASD or arrow keys to move.
- Mouse to aim and fire.
- R or SPACE to reload you weapon

- Boarded up doors can be shot to pieces.
- Be careful around corners.
- Preserve your ammo.
- Extra ammo is hidden around the maps.
- A shotgun can kill multiple enemies with one shot.