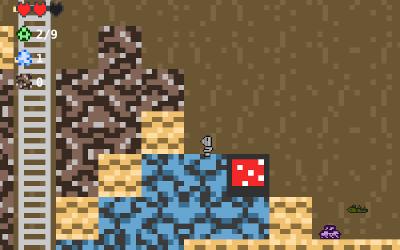 Your spaceship ran out of fuel. You had to make an emergency landing on an unknown planet. Obtain the nine energy crystals scattered around the world to get back to orbit. Drill and build ladders throughout the world to help yourself get around.

Helpful Advice (take it or discover for yourself. =) ):
- Mine iron to build ladders
- Mine ice to shoot ice balls at enemies.
- When moving up against the underside of a block while on a ladder, you can move to the left to dig a tile above and place a ladder. Alternating between the left and right tile allows you to destroy tiles and build ladders at the same time.
- You can mine diagonally by holding the down arrow key and the left/right arrow key. This allows you to mine multiple tiles at once.

Christer Kaitila: What an awesome adventure. Because of my mc training I was scared to dig straight down at first =) but after a while I really started to like drilling all over the place and pickup up crystals. then, late in the game, I noticed that you had implemented flowing lava!!!! nice work!!!!! I wish there were sounds. Overall, an extremely cool entry. Great use of the theme, since the return to your ship can be a harrowing experience, even more scary than the dig downward, the idea to need to build ladders is so good. Really nice work.

Anonymous: Greatly done - Awesome game, with a few adjustments it could easily be featured on our platform - The game is super rich in features and character powers for only 13kb Suggestions - Space or enter to start might be a more natural way of jumping back into the game ;) - Directing the players to where the diamonds are located might clarify the objective (solely depending on the text based explanation might not get their attention).

Jupiter Hadley: Nice little game! I wish hitting up by the ladders let it go up, instead of having to jump.