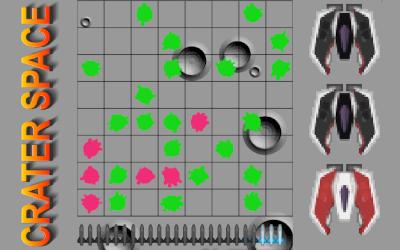 On the moon of planet Figadore the Regolith starships have returned, but they are using advanced cloaking techniques to remain invisible. You must discover the hiding place of the last 3 remaining starships by firing splat missiles.

Try to find all three starships (2, 3 and 4 grid squares in length) in the least misses possible.

Optimised for mobile in portrait. At the start you have the choice of using a Protocol Labs decentralized distributed randomness beacon as the seed.

Sasha Hudzilin: enjoyed playing the game, but seems like only Protocol Labs was used (no NEAR usage)

Dann Sullivan: Pretty simple fun, would be great to have a representation of the size and shape of the ships I'm shooting for. Otherwise, good work, fun shake-up of battleships.

Lee Reilly: Very well done! My 6yo was hooked on this until he managed to win! 😀 A couple of splats/sounds effects would have been great - easier said than done with 13k though.

Ryan Baumann: VERY simple battleship game. Not clear in what way it's decentralised besides *maybe* a random seed (I couldn't find the code for it). Less robust than the original battleship. Pros: Backstory is fun.

Tim Sulmone: Cool use of drand. The game has a battleship/minesweeper vibe to it's a fitting use case of random seeds.

Vlad Grichina: Feels like playing battleship minigame. Integrates DRAND, but not sure why it's needed for single player game.

Johnny Matthews: So this game is essentially battleships, but in space. The limitation of having only 24 missiles is quite a nice twist, and I guess that's the only way to make it challenging if you're playing solo. Unfortunately, I can't see anything in the GitHub repo that indicates any kind of decentralization. The game is hosted using GitHub pages, not IPFS.

Paul Gadi: Fun game but could have explored how to use decentralization more

Dietrich Ayala: Uses Drand!! Would be nice if it explained what "use decentralized" means somewhere. Otherwise the play style is straightforward and fun. Would be rad if you had a leaderboard for winners who did it in lowest number of moves, and give an NFT proving user did level X in Y moves. Nice winning sparkle fountain animation!!