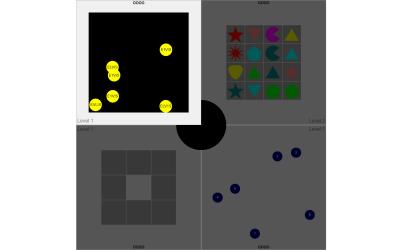 "Concentration Lost" tests your ability to multi-task by challenging you to not lose your place while switching from one basic task to another.

Four simple puzzles are displayed on the screen but only one is active (can be interacted with). You have a limited amount of time (dependent on the difficulty level) to solve that puzzle before the next one becomes active. If a puzzle is not completed, it will eventually become active again as the game cycles through the tasks. Points are earned for each completed puzzle but the game ends when you fail to solve one after it has been active a set number of times (also dependent on the level).

None of the puzzles are particularly difficult have but they have been designed to make it increasingly difficult to concentrate on the active one while not losing your place in any of the others.

Can you keep from losing your concentration and your place when moving from one task to another?

Anselm Hook: Some inputs were confusing. The tutorial is nice but still needs improvements. The challenge was good.