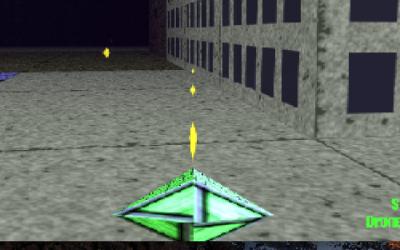 Hit a lost drone on high speed to turn it into your faction.
Destroy the ones from other factions.
Collect power ups for upgrades and energy
Be the biggest faction when all drones are found.

You are the Chosen One. The One that will lead these lost drones to their awaiting destiny. But you are not the only one who tries - there are other factions trying to do that same. The war is coming!

This is a dark city. The city of lost machines. There was a time when millions of people lived here. Nobody knows how it happened, but all the humans are gone now, leaving the city for the hordes of advanced machines. These drones are roaming the empty streets trying to find their purpose now, when their creators are gone. Some turned violent. Some turned crazy and paranoid. But some are just lost and looking for a new purpose. You can give them one - fight until others are gone!

Jupiter Hadley: Really fun game! I enjoyed the way the other enemies (and teammates) moved and worked. I found the space we could fly around in to be vast and well made. It's a great game.

Mitri Wiberg: Good job, game looks very nice. Difficult to understand if you are hitting an enemy, some visual and sound feedback when hitting would have been valuable.