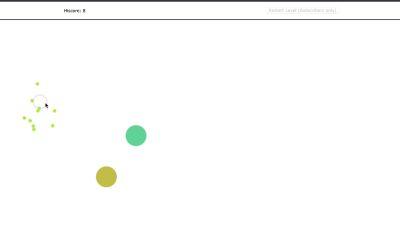 This game is a game to test your memory. Circles will appear, and you need to click the circles in the opposite order as they appear. For each level, the number of circles will increase by one. Coil subscribers will have the option to restart the level, being able to see the order of the circles appearing once more. They also get an expensive gold frame instead of a black one.

Anonymous: Absolutely solid game that excellently implements the game it sets out to implement. The effects are rather crisp and responsive as well. I don't quite agree with putting a rather basic function behind a paywall - I consider level restarting to be inherently free, but the snazzy gold border is pretty sweet. Some more text info could be useful - it's not immediately obvious the grey screen is meant to indicate that circles are still being generated. A countdown could help players keep up too.

Pedro Fortuna: Nice work with all the ball explosions. Try to improve the game concept to make it more exciting.