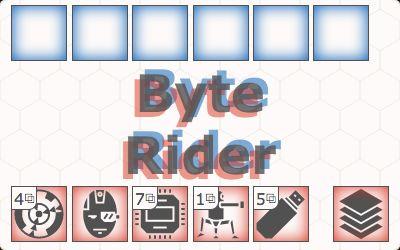 Byte Rider is a two player card game, you against an AI. On your turn you may take one action...

Anonymous: Good: - The game art. Simple & minimalistic but fits well with the game theme. - The game interaction and layout works well on mobile. - The card introduction text on the bottom part of the game. It’s quite helpful for players to get familiar with the cards or game system. - Good readme file on the game repository, explaining the game & graphics inspiration, and game arts license. What could be improved: - Onboarding or game introduction to help to overcome the steep learning curve. You can start explaining the effects, how to play, draw, or discard cards, or introduce the cards step by step (instead of revealing all card types at once). - Sometimes it’s not clear how AI played its cards. Several cards got flipped or animated but I still have no idea what just happened.

Jupiter Hadley: Once you start playing the game, you understand it. The graphics are nice and it's a cool game.