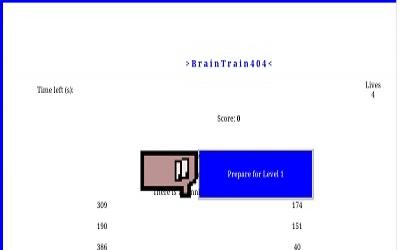 BrainTrain404 - Challenge yourself and train your brain with series of mathematical challenges.

Click/tap 3 numbers that together sum up to 404.
As you go up the levels, you ll be asked to be more quick in responding.

Ania Kubów: As a brain training game, this is a great way to train for the tv show CountDown! It would be nice to see the styling worked on for the next iteration.

Noël Meudec: This is a basic game: find the 3 numbers (among 6) that add up to 404. I tried to play it for a while, but because of the timer I never had enough time to compute anything, so I followed my guts more than my brain. The game is functional, but for someone like me, it is barely playable. Here are a few things I would do to improve the game: - Change the game mechanic so the player doesn't feel stressed by the timer and start picking random numbers like I did - Add visual clues, like how much the player has added up so far (that would probably also involve changing the game mechanic) - Add some graphics/visuals Overall, this game is more a quiz webpage than a game. It is a good start, but it needs quite some work to become an actual game.