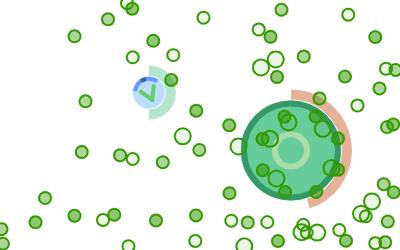 A simple shooting game.You have a shield on your back which can bounce back the bullets.
Your character's direction is controlled by mouse pointer.X to move toward pointer,C to shoot bullets,P to pause/continue.

Anonymous: It's a nice game mechanic and nice game graphics. The controls are too hard and I could not make it more than a level. Maybe better controls and some testing could help make it easier. Anonymous: This was pretty hard to be honest! The first level was quite easy but then it became pretty challenging! I would probably tone down the difficulty a bit by having the enemy shoot fewer bullets, at least in the second and maybe third level.