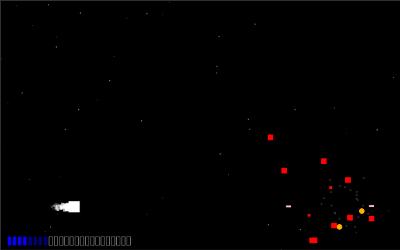 Fly through space blasting enemies and collecting power orbs. Orbs fill your energy meter and power up your guns. Fully power the meter to win.

Spartez Team: Not very innovative concept :) I managed to play three times until I understood that the red blocks are not that dangerous until you get into a huge velocity, and don't touch the gray blocks. The movement of the ship were weird and hard to control. Random suggestions: - Include some visual artifacts that show how powerful my ship is and what kind of enemy I'm against - Sounds :D - The power ups and progressing could be improved, the game goes from slow and nothing to super powerful and fast in a thirty second gameplay

Jupiter Hadley: I really liked all the small details - particle effects and the background. It's a neat game.