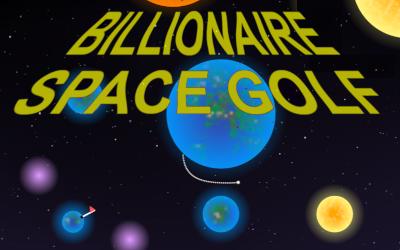 Ordinary leisure trips beyond Kármán line just isn't enough for the buckazoid billionaires of 20xx. In the pursuit of new endeavors, Space Golf was invited.
Get ready to conquer a fresh nine world course. Why not eighteen worlds you say? Because that would require buckazoid trillionaires, and that's just silly.
This was made by Nelson Berg (8 years), Mio Berg (5 years) and their much older father Niklas Berg.
How to play
* The game is best played with keyboard. Use arrow keys to aim and set power and space to shoot. All menus are navigable with the keyboard.
* You can also use the mouse or touch. Drag inside the square to aim and set power. Tap or click to shoot.
* Earth-like planets are bouncy, sandy planets are sandy, red planets are deadly, white planets has negative gravity.
* Your best games are saved, and you can share their urls to others.
Decentralization:
Login with NEAR to share and access other players' best shots.

Sasha Hudzilin: smooth game with complex interactions, enjoyed both the gameplay and music :) nice use of web3 technology

Joep van Duinen: Great concept! Good use of the gravity mechanic, it feels good to play. The tutorial UI could be removed after 1 go, and the transition between levels could be instant instead of returning to the in-between screen. But other than that, I really enjoyed playing.

Jupiter Hadley: This game is very well made and has such good graphics too.

Michelle Mannering: - Love the compatibility of this; mobile, web, touch, keyboard etc. - Bit hard to read the instructions since they are transparent - Sound effects are awesome - controls aren't 100% intuitive - congrats on getting into game design so young! - replay feature is very cool - graphics are super cool! - Not entirely sure how it fits into the "blockchain theme" aside from the name of the game

Tim Sulmone: Absolutely loved the concept/gameplay/physics. The NEAR integration for your stat tracking and replay sharing was also a nice touch.

Vlad Grichina: Awesome, fun to play game. Couldn't get to login with NEAR however.

Johnny Matthews: This game is incredible! It's quite tricky, but a lot of fun all the same. Linking up the highscores to NEAR is pretty standard, and I can't see any major flaws in the TS contract. It would've been nice to see more decentralization; maybe host a copy of the game on IPFS or grab assets from a decentralized blockstore.

Ryan Baumann: Well made and fun! I played something similar to this in highschool. I like the use of Near to view other player's highscores. I wish there was also a random element to earn points (perhaps something to collect?), which could utilise drand to help verify the points results. Very fun though, I played to the end.

Paul Gadi: Love the physics, the sounds and the narrative! Great start with the NEAR implementation as well

Dietrich Ayala: Great music and nice animations in the transitions. Absolutely super creative. Would've been rad if published to IPFS or things like NFTs minted for scores, or use drand.love for randomness. Login and shared scores w/ NEAR is awesome though. Implementation is really nice, with super interesting visualizations, and excellent details like the cross-world sci-fi references and the millions of kilometers traveled meter 😂 I think these kids are destined for great things (and papa too).