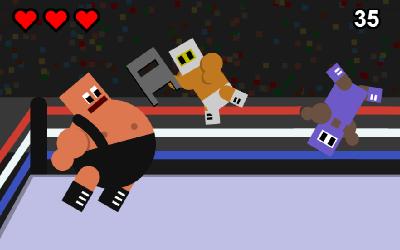 Defend your title as the 404 lb Heavyweight Champion of the World in this no holds barred match against the toughest opponents the ring has to offer! Use size to your advantage and give each contender a swift elimination! Do you have what it takes?

The war is on!

Joep van Duinen: Nice music/sound. Original fun idea/concept. Simple effective on-boarding, clear controls and mechanic. With 2 characters is too difficult. Maybe it could have a leaderboard :) // bonus tip: we'd like: Lucha libre wrestlers are known as luchadores as character.

Noël Meudec: Original timing game disguised behind a wrestling game, I really like the concept . Simple but cute graphics and a nice old school background music. There is enough variety of enemies to keep me invested for a short gaming session. I reached 53! Things I would suggest to improve the game: - The recovery time after a mistake made me systematically lose during the waves of purple wrestlers - It is not always super responsive when I play with a trackpad on my Mac Overall, it is a cool timing game that needs to be tweaked a bit with the controls, but it is great for a short gaming session.