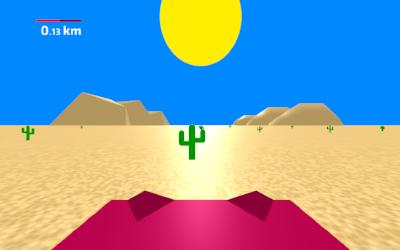 Before it Back OnLine

Take the point-of-view of our beloved offline dino. Run and jump cactus, before it back online.

Click, tap, space bar, or up arrow will make the dino to jump.

Sébastien Vandenberghe: The theme is an amazing idea (probably because the Chrome embedded game is one of the easter egg I spent the most time with). I wish I would have been able to play outside of VR too.

Josh Marinacci: I could not get the game to start on my Oculus Quest or with the XR emulator. However, the game looks cute.

Fernando Serrano Garcia: I couldn't get this to work on the oculus quest, It just shows the introduction and that's all. I would like to try a b&w and pixelated version of the game from the same first-person perspective, as the original game is so iconic that everyone could recognize it even without the introduction :)

Diego González: Tested on an Oculus Rift with Firefox and a Note 10 with Samsung Internet. Love the intro-end transition from 2D b&W to 3D color. THe response of taps in mobile devices seems laggy and slow in comparison with the desktop version, and the idea is nice althought some UI elements do not appear on the mobile version (distance indicator). Like the perspective and the has nice graphics, and kudos for the storytelling in getting the player in and out of the game.