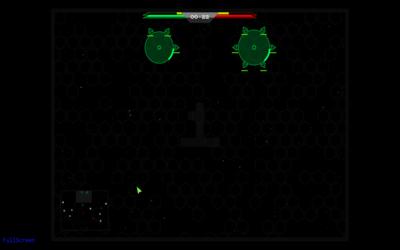 Battle against enemy ships to take control of all lost sectors!

Tips: Drag the cursor over your ships to control them. Right-click to send them to a location. Percentage of sectors secured is in yellow, while percentage of remaining ships is in green.

Use the WASD keys to move the camera.

Jason Carter: Really impressive! Very enjoyable and well made. Difficult as well, got smashed a few times until I figure out how to gain more terrain, but still couldn't beat it. Good job on the enemy AI. As suggestions maybe have a smaller more dense environment. Also didn't really see the competition topic ("lost") in the game. Has lots of potential. Good job and thanks for participating in the compo!

Jupiter Hadley: Really fun game! Lovely graphics as well, I really liked the little animations on them. I do wish there was a way for me to create more ships, instead of having a set amount, but the game itself is really nice.

Mitri Wiberg: Very nice game, instructions could have been better, took a bit to understand how to select and direct. Very engaging concept. Saw the game early on it improved a lot. After clearing the enemies it gets a bit boring having to convert all the areas, maybe killing all enemies could have been a secondary criteria for clearing the level? great work!