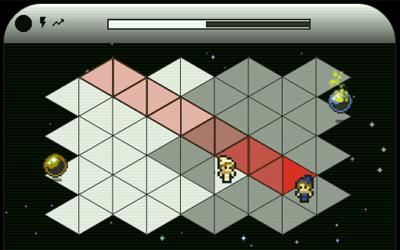 Battle of Mages in the UniReverse

A tiny turn-based game for 2 players (no AI, no network playing).
Two great wizards confront in a weird region of the universe: the UniReverse.
Each turn a player may use his magic to reverse enemy tiles (if he's adjacent to them) and then move through tiles of his own color.
If a wizard reverts the tile where the enemy is resting, he kills him and wins the game.
Moreover (and this is important), a player can win by creating a continuous pathway made of his color tiles from his home base to enemy's base.
There are various power-ups that players may collect during this great magic battle (they are explained in the game).

As far as i know it's working well on Firefox, Chrome and Safari, including sound and music.