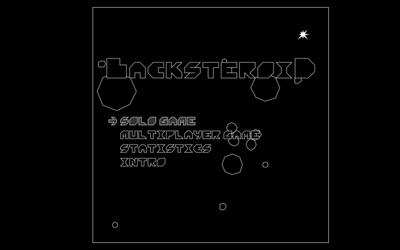 Backsteroid is like Asteroid but you must move with the recoil of your canon!
It's hard and it's multiplayer!

Anonymous: This game is absolutely hilarious - from the humorous intro to the totally insane gameplay premise (both in concept and in practice), it makes for a fun experience. Not much suggestion on how to improve it - maybe a way to play a multiplayer game with an AI partner for those with no friends? Anonymous: First of all congratulations on finishing your game and making sure it fits 13k only with all that art and graphics. - I loved the game graphics and the consistent retro vector style in text and everything. It made the game pop out and made it very consistent. - Loved the silly intro with all the jokes and consistent art style with font and game graphics - I think the mechanic of the games play well as it is a harder version of asteroids as there is no direct control over the ship but only the push back of the gun which works well with the narrative of the game. - In the narrative, it said I might encounter bounty hunters (I think you meant the multiplayer mode). You could name the modes based on that or allow AI to appear in the Sologame as bounty hunter for consistency. - The special ability button was an interesting mechanic that I think is overpowered and weird. Weird as I don't know where I am gonna reappear which might make me vulnerable but since I have a little bit of shield when I reappear I could spam the system using it. Maybe you can make it first recharge by destroying asteroids or even better make it decrease the score so it is a tradeoff. About where to appear may be it is kind of blink where I can hold it and press direction to jump towards that place. Overall nice game, enjoyed playing it :)

Florian Rival: That's a great idea! The game is surprisingly hard, it's easy to get the ship flying nowhere :D But love the concept and the minimalist style. It's very nice to have a multiplayer mode, and the game is addictive in the sense that you're always trying to survive longer :p Great job!