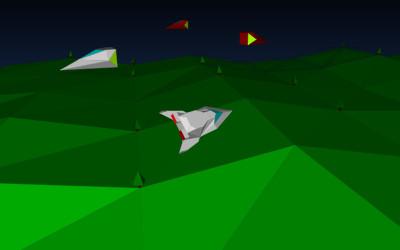 It's 50 years since humans first went to the moon. Now that we are planning to go back, the Regoliths need to escape before we find them. They have light-jumped to planet Figadore in the Hercules cluster to flee.

Fred has been kidnapped by the aliens who want to take over the planet. Play as his sister Jade and race to get the planet back and prevent the Regolith spreading a deadly infection.

WASD or CURSORS with SPACE or ENTER to fire disinfection missiles against the red starships.

Anonymous: Good: - A 3D space shooting with interesting game mechanics! Instead of shooting enemies, you tried to disinfect them. - Gamepad support works well. - The game dev diaries, I always enjoy reading behind-the-scene stories from the creator. It’s nice to understand the thinking, the design process, and also the craftsmanship behind a project. I also learn that you sketch and design the game assets on your own. Great job! - The spaceship design! The color scheme and the shapes remind me of Star Fox on N64. Well done! - The 3D landscape looks great. I like you put attention to details: trees, rocks, and the moon. - Good game UI: HUD, score, and menu. - Good Sound FX. What could be improved: - I cannot start the game by pressing fire on my gamepad (xbox360 controller on Chrome & MacOS). Firing inside the game works though with the gamepad. - Once you pass level 5, the game could be too hard (since there are too many collisions happen among the missiles & the ships). But sometimes the level could be too easy as you can beat it by shooting rapidly to different directions. Anonymous: This was fun, despite a few minor performance issues on my Macbook. I can imagine The Star Fox nerd in me would have played this for hours at a time back in the day! Nice use of jsfxr also. One thing I'd think about, is a way to make this more challenging e.g. die on collision, enemies fire their own weapons, ships reset to red after N seconds, etc. Easier said that done... especially in 13kB.
back