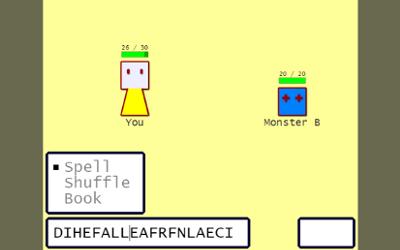 [Background]
Welcome to the world of magic world!

You are in a trial. You must beat the boss to become officially a wizard.

To cast a spell, you have to create it inside the "Spell Box".
Inside the Spell Box, there are some random letters.
You cannot type anything, the only thing you can rely on is ... BACKSPACE!

Kevin Whinnery: It took me a minute to figure out how the game worked, but once I did, I enjoyed the concept. Mixing a word scramble puzzler and an RPG is a great concept. Overall this was a really strong entry, and one that I feel could really be cool if you kept going. Like chicken and waffles, these are two great tastes that taste great together! Worked: - Adding letters to the queue in a specific order was an interesting strategic element - Finding the letter to "spell a spell" was a great concept - Surprising depth for such a short game !Worked: - Hard to do in a short timeframe, but a brief tutorial with a level that is guaranteed to already have a spell inside the letters given would be nice - The battles were too short for the strategic element of letter placement to kick in. Since all I needed was a few spells to beat any enemy, it didn't matter that much which letters I added to the list, or which ones I saved for later - It would be cool if the list of letters carried over between battles, so you could do some long-term planning around which letters to keep and which ones to delete

Anonymous: Great job - Innovative game concept! - Love the abstract art Suggestions - you could add some copy in-game around the 'space to start' and arrows to move, took me a bit to find out. - Game play is a bit confusing at the beginning, removing letters to activate the spell feels like breaking the flow of the game play a bit Awesome work!

Jupiter Hadley: What a unique and lovely concept! It's really nice.