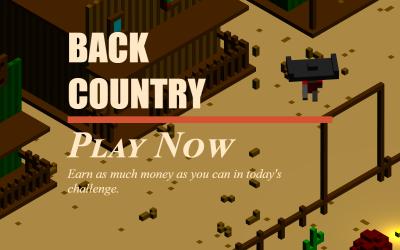 Kill or be killed in this hack-and-shoot set in the Wild West! Use the mouse or tap the screen to control your avatar, and earn as much gold as you can from the sheriff's bounties.

The world resets every midnight UTC for a completely new experience for all players.

Paid subscribers get access to the clothing store where they can change the appearance of their character.

Anonymous: Main gameplay loop is great - a nice horde of enemies to keep the tempo up, and a simple but distinct visual style. Also appreciate the fun Web Monetization bonus that doesn't obstruct gameplay in any way. Only real suggestions for improvement are decoupling moving and shooting a bit so it's possible to dodge attacks while retaliating, and of course, more levels in which to pursue bounties.

Florian Rival: Absolutely impressive! Love the graphics, the style of the game and the gameplay is easy to get started (though a few explanations would have been useful). The idea around the 24h map is totally great. Awesome job!

Jupiter Hadley: I like the graphics and I love the idea of a new game each day.