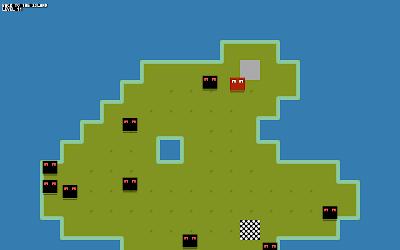 Back to the Island

Avoid the critters roaming the grasslands and make your way to the chequered flag to advance to the next island. Rinse and repeat.

Arrow keys, WASD, or ZQSD to move on desktop; virtual joystick to move on mobile/tablet.

Anonymous: Great game aesthetics. I liked the graphics and how smooth it looks. For the game design part I was confused initially given I just started playing in the level, and I thought that, what I later figured out it was the goal of the level, was actually a trap so I couldn't touch it. Also I thought the levels were randomly generated until I repeated the same level plenty of times. There could be some improvements on how the levels are generated because many times I can simply end the level without any challenge, and making the creatures go faster maybe not the only mechanics that can make the challenge. You can add some variety of different monsters that can kill the player. For the improvements you've made for 0.0.2 is a good general direction, please continue! :) Anonymous: This is a good start but I feel more could be done with the concept. There was no real sense of progression or difficulty curve. I would like to see increasingly large islands, more and faster enemies as you progress. As it is now you could end up next to the checkpoint on a small island far into the game. That kind of scenario should be reserved for earlier levels.