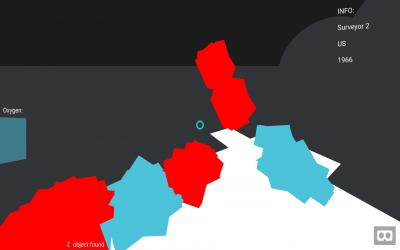 Back to the Earth

50 years ago, the man has conquered the Moon. Now, you can play as an astronaut which accidentally remained on the Moon. Of course, you have to go back to Earth. You can collect objects, from old space wrecks, and if you have found enough wrecks you can build that space ship which will return you to Earth.
You can collect memories, which the human race left on the Moon. This will represent your score.
But pay attention to your remaining oxygen. Each move cost oxygen. If you are out then you will die on the Moon!

All wreckage info and memo is based on the real Moon missions!

Sébastien Vandenberghe: Trying to come BACK from the moon is pretty creative and already sets the atmosphere of the game. I wonder whether a bit more attention to the shapes to collect would have helped feeling more immersed in the game.

Josh Marinacci: Clicking desktop game didn't work for me. In VR the game works but I can't move tiles. I was able to collect objects, though.

Fernando Serrano Garcia: Needs a bit more work on the mechanics as I found them confusing, but the concept is interesting. It is also important to move the HUD close to the center of the cameras as on the Oculus Quest is almost impossible to see the whole text from the top

Diego González: Tried the game in an Oculus Rift using firefox and Note 10 with Samsung Internet. Big fan of the graphics and the simple yet clever details like transparency in the hub elements and the hud itself. Really keen in the facts and the historical accurate details. I found it a bit hard to understand how to move, and wasn't able to properly move from the initial starting point, but I saw a path forming with I followed until my space and line of sight didnt allow me to. Locomotion (and indicators) would benefit from enhancements. Kudos for giving it a story, mission and explainer in the game. (floating text at the start) Lots of potential, really nice.

Jupiter Hadley: I like how you gave objects descriptions and such, as you probably could not have time to make all of the graphics. I think it's a good start.