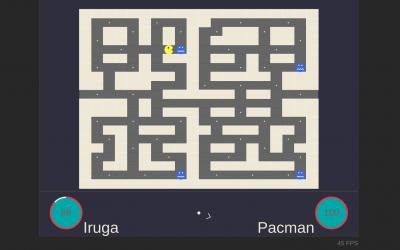 In a world ruled by digital games, one of them travel to past and try to corrupt classic digital games. Now, you are the only hope for gaming world. Go back to past and destroy the evil! Play through different versions of classic games and win the game. You can play using your mouse by clicking and moving it. Each game has a tutorial explaining how it works and how can you beat the boss. There is two modes of play, with different benefits. For Coil subscribers, you can revive yourself when you lose a game and try again from that game and not from beginning.

Anonymous: Really nice way to combine some older games into one and flip the game mechanics! Pac-Man was very satisfying, but a little difficult to control on my trackpad. I j would have found it a little easier to play with WASD/arrow keys. The pong idea was very interesting too - I'm definitely going to fork this and play around with the gravity / speed for hilarious results :) Anonymous: Good: - Nice game idea to travel back in time fixing corrupted classic games. It fits well with the competition theme! - Different game mechanics in 1 game! - Good game UI and flow: menu screen, asking for player’s name, and good tutorial/instruction before any new game starts. What could be improved: - The control sometimes feels un-intuitive, some are hard to figure out, for example, the pong. At first, not sure what I’m controlling (is the bar or only the ball?). The magnetic power seems don’t have any power to bend the ball movement.
back