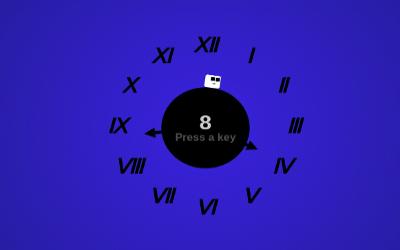 Save little Bob: try to escape the clock hands, trying to kick him out!

Florian Rival: Love the idea! Surprisingly hard, maybe an indication of the clock changing direction would have been helpful. Apart from this, quite addictive and challenging. Love the simple graphics style! Good job!

Anonymous: First of all congratulations on finishing and delivering a game for JS13k competition which is not an easy task. I like the concept of a circular infinite runner. The art and hue changes add cool effect to the whole game, having some juice make the character pops out. My problem is with the height of the jump, u usually use double jump and single jump is a little unused. Maybe it can be solved by adjusting the jump height so there is different type of challenges to pass using different jump techniques, may be one of them you can't do double jump and only single jump is needed. The change direction is interesting but sometimes it happen in weird timing while I am in mid air which is very hard to do. You could always check and never do that change when you are in mid air to avoid that problem or if you like that difficulty ramp of changing direction in mid air, maybe you could make it happen later in the game after X amount of points because right now it makes my scoring between 0 to 7 based on when it will happen. Good job :) Anonymous: Awesome gameplay. I only got to 5 though 🤦🏻‍♂️ Are the any perks for web monetization users? Thank you!
back