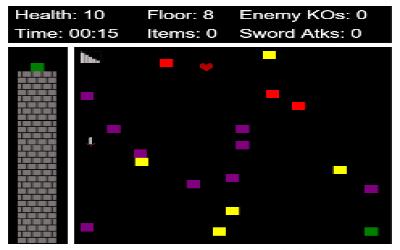 Back Down The Tower

In this game, you've most definitely defeated the boss, and you just need to go back down the tower to go home and buy groceries and walk your dog (groceries and dog not part of the game).

Unfortunately, you've used a cheat code to get to the boss and all of the enemies and traps are still there. Too bad the cheat code was a one-way ticket since it was bought from a shady cube.

Contorls:
Arrow keys to move
[a] to attack
[z] to grab and move gray boxes
[esc] to restart

Anonymous: I love the intro text! Even heroes have chores to do! I like the combination of puzzles (moving boxes) and the action sequences. I understand that the enemies and obstacles are boxes since that was easy to do, but even adding some tiny graphical elements to the boxes such as black dots for eyes would turn them from boxes to little cube men and monsters. The sword was the only thing that had a bit of pixel art graphics which made it stand out, but it also became a bit visually strange.