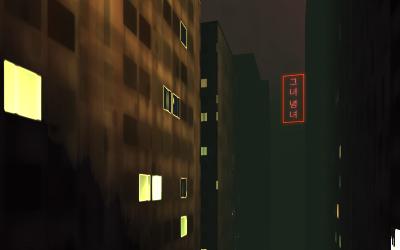 OH NO! It's the future, it seems. Pollution and TOXIC WASTE is killing humankind. Your goal is to grab all those WASTE RINGS and GO BACK HOME. Will you do it, or just surf the purple fumes to get lost in the horizon?

Sébastien Vandenberghe: Those graphics looks real good to fit in 13k !!! The music and full ambiance created around the waste land is good. The only drawback in my mind is that it might be harder to not feel some kind of motion sickness with this kind of games.

Josh Marinacci: I could not play the game on my Oculus Quest because there is no keyboard. Also there was no button to enter immersive mode. The game looks pretty though, and the soundtrack is great. I'm impressed with the detail you managed to capture.

Fernando Serrano Garcia: The graphics look really good, the overall atmosphere, the music. I tried it on the PC and it started at random position and I couldn't really play it well. I tried also on the quest but I don't see any option to enter VR so it didn't work as expected either :\ I hope you could add VR support later own and fix these bugs as it really looks cool and I would love to fly around in VR

Diego González: Tested on an Oculus Rift with Firefox and a Note 10 with Samsung Internet. Game has a very nice and polished aesthetics, but misses the mark for mobile or headset use. Does not advertize WebXR functionality so not sure if placed in the wrong category. Game would definitely benefit from driving with device tilt instead of keys. Couldnt play it on the mobile device, couldnt play it on the headset. No XR element present. Apart from that, loved the bark futuristic atmosphere and the whole look an feel.

Jupiter Hadley: Couldn't seem to play it, but I really liked the music!