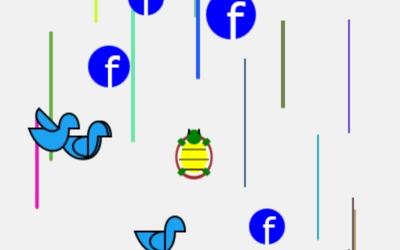 Awkward Turtle is awkward. Help him avoid all social media interactions using the arrow keys to reach the winning score of 13k!

Anonymous: I liked the effect of lines to give a velocity. The turtle had to fight really a lot to avoid social interactions. The game play was very smooth and it worked normally. I liked the Instagram touch of boss :P You could improve the feeling of velocity of the turtle with making larger lines running slow and smaller lines going fast, to make a feeling of parallax. Anonymous: Fairly simple game, but it does become a bit challenging after a while. Some thoughts: * The difficulty could increase a bit faster * I'd like to see a bit more animation. Maybe the turtle's legs could be wiggling as it tries to flip over? * You could try and use the lines to convey depth and a kind of parallax effect. Thin, shorter and slower moving lines with a bit of transparency for lines further away and thick and longer for those closer. * Maybe some basic sounds? * I'd decrease the health bar from right to left. It feels more natural.

Jupiter Hadley: Simple concept, but it's done nicely. I like the lines on the background.