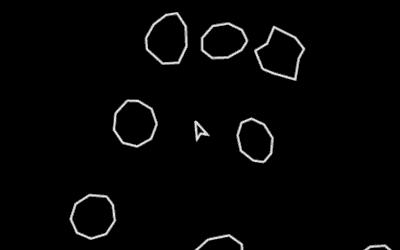 Asteroids Extended is a small exploration game. It can be controlled with arrow keys and Space to fire. On mobile, click the screen to show overlay buttons. Use "f" for forwards and "w" for weapon to control the ship.

The player does not need to fear dying as none of the objects have collision.

The map has an asteroid field and four planets. The player can shoot the asteroids and fling through space using the gravity of the planets.

I consider continuing development after the jam, so you may want to check the Gitlab page for the most recent version. In honour of its origin, I intend to keep all versions within 13 kilobytes.

Ahmed Khalifa: First of all, congratulations on finishing a game for JS13K, that in itself a great achievement and you should give yourself a round of applause :) I like the idea to use asteroids as the main mechanic for the exploration game so good job on that. There is still some missing mechanics from asteroids why do I need to destroy asteroids? an easy solution that fits better with exploration game, is resources. You collected resources from the debris of the asteroids which you can use to make space jump or advance your ship so you can explore faster and better the space. I liked the directions to the existing places in the level but I think it also make exploration more easy just move after one direction till reach, maybe you can consider hiding the end goal and have a minimap that have some fog of war so the user knows where they didn't explore but what they will find, maybe also you could make the player visited location harder to visit again because the player ship leave toxic wastes so you try to avoid revisiting and it become more challenging to visit the whole space. I think there is a lot of interesting potential in that game, keep the good work :)

Joep van Duinen: - fun concept, really like the gravity aspect - could use a goal and more game play such as collecting things in the universe to engage players more overall very nicely polished title!

Timur Manyanov: The Good: I like that the author tried to extend the asteroids, cause they are very basic and I never liked the original. The Bad: Unfortunately I couldn't understand the logic of four planets, when I started flying thru screens I've got somewhere empty and bullets started flying in a weird way. Maybe more explanation on gameplay required. In general it's the usual asteroids for those who like this kind of games. For me the controls seem inconvinient, both flying and shooting.