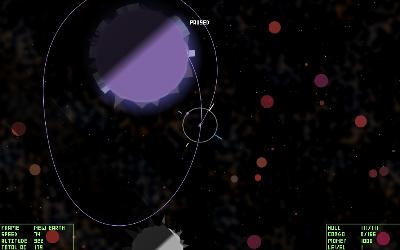 Back the human revolution against an evil AI in this perma-death orbital-physics shoot-them-up!

You must destroy all AI cities. To do so you have to mine resources on abandoned planets, sell them on a target planet, and, once resources are high enough, attack a enemy city (red) to start a war.

Your navigation tools are the orbit predictor (pink line) and the navcircle:
- Yellow Strip: Prograde, your direction of motion
- Blue Strip: Normal
- Short Strips: Opposite to long strips

To move between planets set your reference frame to one, burn towards it until your orbit gets close, and timewarp until you have arrived. Make sure to slowdown!

Florian Rival: Very interesting game! Surprisingly hard to control at the beginning. Love the idea of having this huge universe where you can scroll at the level of your ship or at the level of the solar system in a few seconds! Would have been interesting to have a few more explanations during the game. The timewrap is super useful :) The minimalist style is very nice too. I quickly felt part of the game universe while playing it. Only downside: some rendering artifacts on my computer (macbook pro). Great job!

Anonymous: First of all, great job on managing to finish and polish your game and manage to put it on a small footprint. I like the idea about being in space exploring PCG universe and going from one place to another but it was pretty hard to manage and control everything. I know the physics acts like in actual space but I think you should simplify it a little and focus more on the exploration of the generated system. In the current state it is super hard to control that I lose focus on the whole generated planets and only focus on my ship and its trajectories and always try to fix that. I understand that you may want to focus more on these details and give the feeling of furstration and lost in space but I think these feelings might be too much that it covers the feeling of exploring the final frontier and battling enemies and trading resources.

Jupiter Hadley: This game was a bit complex for my understanding.