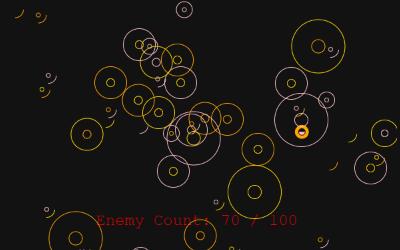 Press [R] at any time to update the game seed with DRAND's latest generated random (Available Approx. every 30 seconds)!

Ace Cadet! is my little take on the old top-down, retro graphics space genre. You play as an Ace Cadet defending their homeworld. Intruders are attacking, and it is your job to stop them! Keep their numbers low as their attack intensifies.

This project is built with Kontra.js and uses Protocol Lab's DRAND (https://drand.love) to seed a number of game changes, such as player attributes, enemy attributes, and weapon attributes.

Dann Sullivan: R element didn't seem to do anything, played extensively, wish the seed element had worked for me.

Sasha Hudzilin: really enjoyed the gameplay (the only thing missing is life count, didn't find it); on othe note, didn't notice use of NEAR though for decentralized category

Michelle Mannering: - interesting take on decentralisation - very intuitive game and controls - seems a little too easy though, not full 360 degree shooting, but still love it!

Tim Sulmone: Really interesting way to use DRAND random values. It's given me quite a few idea's to ponder on.

Vlad Grichina: I love the minimalistic aesthetic. Playable game, integrates DRAND for randomness (not sure why needed here however).

Johnny Matthews: This game is haaard! But quite fun at the same time! The developer clearly focused on gameplay over graphics and style, which I appreciate! It's also really great to see Drand implemented in a game like this. One improvement I'd suggest is maybe adding Drand as a seed into the JS rand function, rather than using the raw randomness from Drand itself. Then the user could update the game's randomness whenever they wanted, instead of having to wait until the 30 seconds are up. It also would've been cool to see this hosted on IPFS.

Paul Gadi: Movement feels good and powerups are cool, but can be a bit repetitive

Dietrich Ayala: Uses Drand!! I was overwhelmed 😂 Great controls and implementation w/ a neat look that starts basic but looks cooler as you get further along. Needs some music for dramatic tension.