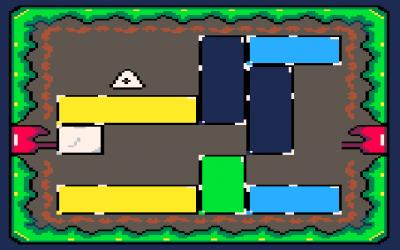 A puzzle game about sliding blocks.
Gameplay:
Move the white block across the board. You need to move the other blocks to make room.
Controls:
Arrow Keys - Move Block
C - Next Block
X - Previous Block
Enter - Restart Level

Christer Kaitila: Amazing work! I love the bright artwork, and the polish of the arrows showing where your possible moves are! It was confusing random guesswork to select a block with x and c. What if as s shortcut each block has a number in the center and you could type that number 1..9 to insta select with one keypress? I would love that. In any case, this sliding block puzzle is so polished and fun, it's a great game at any size, all the more impressive that it fit in 13k. Excellent job!

Ahmed Khalifa: First of all, congratulations on finishing and submitting a nice puzzle game with a lot of level to the JS13K. I enjoyed the difficulty curve mostly and figuring out the mechanics of moving several blocks, etc. My problem is after some point the difficulty increases so much that it become hard. Maybe you could introduce less blocks early than later. Also, the game could also use some connection between switching between blocks and the visuals. I didn't get why the visuals speeds forward and backward. Lastly, instead of next block and previous block. Maybe you hold the button nad move around with arrow keys to pick the correct block or use numbers for them because when you have a lot of blocks, it is not easy to rotate around. Overall, great game and thanks for submitting the competition.