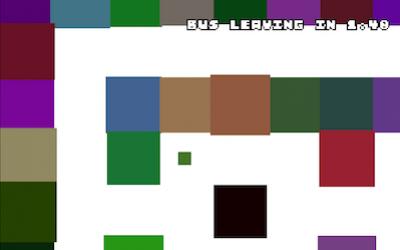 A Tourist in Paris

You're the Tourist, geographically and culturally lost in Paris, trying to cross iconic monuments off your bucket list before your tour bus departs for the next European capital.

The game is unfinished (missing is all the character and city pixelart, as well as asking directions to locals) so it relies on programmatic placeholder art.

Diego González: More fun than I expected! There's something about all the bright colours that appealed to me. Nice work!

Tomasz Wesołowski: I thought it's super hard but it's kind of easier once you get a basic idea how big the map is. Most importantly: WHERE IS THE BUS they told me there's a bus! No, really, a bus could work, imagine having to decide - look for the 13th monument and risk missing the bus or go for the safe 12?

Giovanny Beltrán: Running out of time trying to get all the spots!

Jupiter Hadley: Very nice concept - found the game to be pretty fun to play as well.