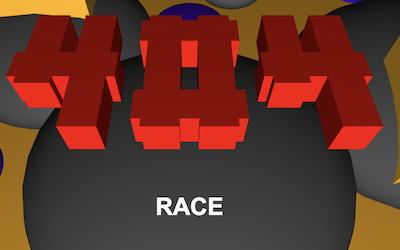 Race to win in forsaken and utterly lost - likely not even found - locations on Tat404ine and End404r.

To advance to the next race you must place 1st.

For touch screen the droid follows your touch. This is indicated by red circle and white dot. The droid turns and accelerates to the compass point.

In case you feel like supporting the game, you will get to drive 404 Vader who probably has lost their trophy and themselves and does not appear in the game otherwise. 404 Vader is Luke's parent and possibly all the droids too. So, it is kind of a big deal. But the experience is mostly cosmetic.

Nathan Lie: This racing game is fully functional - the controls are sensible, but a number of factors make it tough to navigate the track. Collision is rather devastating - it completely cancels all momentum, which makes the likelihood of colliding with other racers especially devastating. The Web Monetization benefit's cute though.

Anselm Hook: It is nice. I'm didn't see the Vader tho!

Ewa Mazur: I like the gameplay view and the way the vehicles look like toys. I love the 404 Vader vehicle for Coil subscribers, although you could show in the game (in some way) that this is something extra for them. I can't win, but the game is fun, so I will definitely try again, and again, and again ;) Good job.

Christer Kaitila: I won the entire game! And I enjoyed every single second of it. I can't believe you somehow coded actual phyics based 3d driving with steering AI?!! So impressive. The feel and speed ad control were perfect, and I really liked how clear the next checkpoint was. Knowing exactly which circle to drive to next was really satisfying. I didn't like the sounds but at least there WAS sound! =) The game was extremely well made in every way. I found that later levels were easier than the first few, and would suggest a softer introduction for new players by giving them the last simple circuit level first. But then again, I respect that you put your best work front and center, as that first level is the most epic. Amazingly well done.

Jupiter Hadley: What a nice little racing game! I like the sound effects and graphics too.